IASC’s telepresence technology in the news

IASC (Itasca Area Schools Collaborative) telepresence technology received media attention this weekend locally, for its use during a recent school board meeting, and statewide as part of “A Lesson in Change” that aired on the MN Channel. 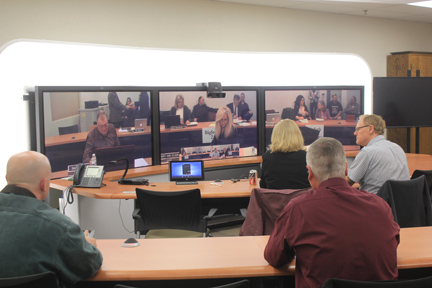 ISD 318 board members conducted a meeting in Bigfork that individuals in Grand Rapids were able to participate in via the district’s new Cisco telepresence rooms. Both rooms are designed to look the same, giving the illusion that the screens are merely windows to another part of the room. Nathan Bergstedt | Herald-Review

Each year, the ISD 318 school board makes the long drive up Highway 38 to conduct a meeting at the school in Bigfork, which is an extension of the district. But on Tuesday, April 2, when the board met in Bigfork, an audience in Grand Rapids was able to sit in on the meeting by means of the new telepresence rooms that have recently been built in both Bigfork and Grand Rapids High Schools.

Read the rest of the story

Redesigning Minnesota: A Lesson in Change
This program will be of interest to anyone concerned about the future of education in Minnesota. The IASC segment starts at 20:20 and includes local educators Jim Smokrovich, Joe Akre, Renae Garski, Mark Adams, Dan Parent and Gerald White.