The IAISS welcomes Nick Pretasky and his family to Northern Minnesota, and to the Student Success Core Team table! Nick will be hosting an open house at Northern Lights Community School this Thursday, August. 22,  from 4 – 7 p.m. 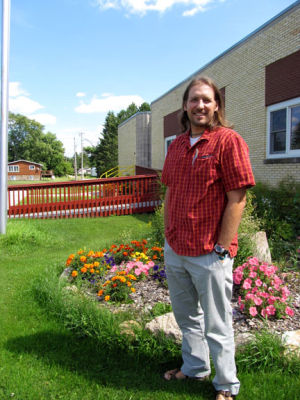 Following the retirement of Northern Lights Community School (NLCS) Director and Co-founder Dave Hagman, newly hired Director Nick Pretasky has been in the process of acclimating himself to his new school and his new town. The former LaCrosse, Wis., resident took over responsibility of the charter school at the beginning of August, and so far has nothing but positive things to say about his and his family’s new home.

“My family and I are pleasantly surprised by the friendliness and the acceptance in the area; everyone from the grocery store to the parks that my children have played at,” said Pretasky. “People are very accepting and willing to provide information or help.”

Much of his initial impression of the area so far as been at NLCS though, where he has been busy learning the ins and outs of the school, and meeting the families of students and prospective students.

The majority of Pretasky’s educational career has been in leadership positions, where he’s worked to try to make the education experiences of students both more personal, as well as more innovative. He is the co-founder of the LaCrosse Design Institute, another project-based charter school that focuses on the elements of design in order to teach students how to apply themselves to real world problems.

“Design is all about autonomy, if you think about it. You’re designing the cover of your book, or you’re designing your new house… you have this ownership and this responsibility to make it look the way that you foresee it, and the way you see your potential going,” said Pretasky. “The whole philosophy of the school was that you’re designing your own education.”

For Pretasky, autonomy, the feeling of freedom and self-direction, is a crucial component in education. Using the business world as an example, he talks about how it’s the individuals who are the most personally involved in their projects, who have put themselves into the work by means of choosing the direction it needs to go, who are the most successful. Instead of the development of a curriculum which every student needs to follow, Pretasky said that starting this fall, each student at NLCS with the assistance of their parents and the faculty will develop their own personalized education plan based on their interests and passions.

Based on his experience in northern Minnesota so far, Pretasky said that he’s excited about the opportunities that lay ahead. Because of the expansive wilderness and friendly communities, he and his wife, Krissy, feel their move to Grand Rapids will be good for their two daughters, Naomi (2) and Anika (4 months).

On Thursday, Aug. 22, there will be an open house at Northern Lights Community School from 4 until 7 p.m. Pretasky invites the greater community to come see the school, adding that he looks forward to meeting more people in the area.