Our community is fortunate to have Rachel Bledsoe, the passion behind Bullying – Be the Solution Not the Problem. What started as concern about her own child, has rippled into a new conversation in the Grand Rapids community about bullying, connecting our shared past to our shared present.

Bullying – Be the Solution is currently fundraising for a memorial for Forest Willey, to be dedicated in October. Donations for a memorial are being accepted here.

A group is forming in support of work currently being done around the Pathway to Student Success, goal “Every Student Feels Accepted.”  Contact Jaci David at jsdavid@blandinfoundation.org or 327-8705 for more information. 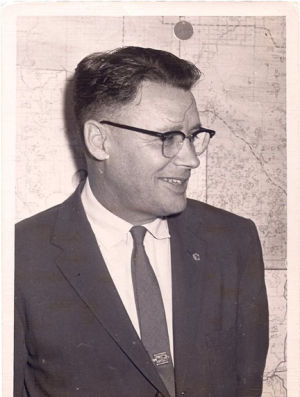 On the morning of October 5, 1966, a 15-year old student named David Black walked into the Grand Rapids middle school with a .22 caliber pistol. He shot and wounded a student before he was confronted by school administrator Forest Leo Willey, who attempted to get the gun away from the student before he shot anyone else. Willey was shot in the arm and the abdomen before Black left the building, where he was caught in a brief shoot out with police before being arrested by future police chief Harvey Dahline.

Despite the effect the incident had on the community at the time, the school shooting has become a lost memory for many in Grand Rapids and the surrounding area; a dark episode that’s perhaps happily forgotten by those who would prefer to think the best of their home. But whereas the incident could be happily forgotten, that says little for the man who gave his life to save the students, who at the time was proclaimed to be someone the community would never forget.

Nearly 50 years later, Rachel Bledsoe, founder of the “Bullying – Be the Solution, Not the Problem” movement, has decided that neither the incident nor the hero behind it should be forgotten, claiming that there is much to be learned from both. She is currently behind a campaign to raise funds for a memorial monument in dedication to Willey that is to be placed at Robert J. Elkington Middle School.

“Our parents and our educators need to realize that this was the ultimate sacrifice somebody made, and we don’t want to rewrite history. We want to learn from our past,” said Bledsoe.

Part of this learning has to do with Black himself, the student who shot and killed Willey. Bledsoe contends that we refer to Black as simply a murderer at our own peril; that whereas he did a terrible thing, it did in fact happen in a certain context. Black was relentlessly bullied, had a difficult home life, and lacked an appropriate outlet in which he could come to terms with the difficulties in his life, and therefore grow from them. Instead, these difficulties lead him to a series of awful decisions, ultimately ending with Willey’s death.

“We’re telling David Black’s story,” said Bledsoe, who feels the more we learn about what drove this student to the shooting, the better we will be at preventing it from happening again.

But it’s also about remembering the person who put himself in harm’s way to protect the students. That’s why the memorial, which will be a granite bench, will be engraved with Willey’s name and face.

When she heard about the proposed memorial, LuWanna Johnson, Willey’s daughter, said she “was very touched by [Bledsoe’s] thoughtfulness and by her caring.”

“I’m sure so many people don’t know the Willeys and weren’t aware of [the shooting],” added Johnson, who now lives in Seneca, S.C. “It brought back many memories.”

Johnson was 28 at the time of her father’s death, and was just starting her own family. When she heard about the news of her father being shot, she said her reaction was that of “total devastation.” Even though nearly 50 years have passed, she is still struck with memories of her father whenever news of another school shooting occurs somewhere in the country.

“We so hurt for the families, because we know what they’re going through,” said Johnson. “It effects the rest of your life, really.”

Bledsoe is currently raising funds for the memorial, through the selling of “Bullying – Be the Solution, Not the Problem” merchandise, as well as collecting donations with an account at Grand Rapids State Bank, as well as at Northland Monument, who is providing the engraved bench. The memorial will be dedicated the week of October 14, which will coincide with the school district’s involvement with Rachel’s Challenge, the nation-wide anti-bullying project named after the first victim of the Columbine school shooting.

To learn more about the fatal school shooting that happened in Grand Rapids, Kevin Roth, the student who was shot by Black before Willey’s intervention, will be coming back to Grand Rapids to speak to students at the time of the dedication.

Those interested in making a donation for the Forest Leo Willey Memorial Monument can do so at Grand Rapids State Bank in the “Be the Solution” account, or by calling Northland Monument at 218-566-1324.