This piece by Nathan Bergstedt shows the positive outcomes that result when schools and community organizations work together. Read on to learn how the vital role of Cooperative Solutions in the Peer Mediator program at Vandyke Elementary, how it fits into a larger vision of “students assisting each other with their own problems to help contribute to a generation of emotionally healthy students throughout the district.” 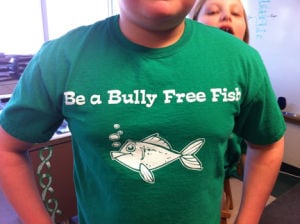 The long legislative journey of the Safe and Supportive Schools Act came to a close on Wednesday when Governor Mark Dayton signed the bill into law. The bill, which has become a point of controversy amongst some lawmakers who have argued that it will only contribute to or is the source of the problem, will give schools access to a wider array of educational and supportive tools to deal with the issue of bullying, as well as create a uniform framework throughout the state for school districts to reference as they create the details of their anti-bullying programming.

Many schools are ahead of the curve when it comes to dealing with the social well-being of their students. Off and on for the past few years, Vandyke Elementary in the Greenway School District has implemented a Peer Mediator program amongst the school’s fourth graders. Now that the school has hired a full time counselor to coordinate the mediators, the district’s administration is planning on making the program a consistent part of Greenway’s efforts to curb bullying.

This year, 20 fourth grade students became Peer Mediators (or as the Kindergartners tend to say, Meat Eaters). At the beginning of the school year, students who wanted to be Mediators applied for the position. The 20 that were chosen then went through a training session with Cooperative Solutions, a local nonprofit mediation services company, where they learned basic steps to take in order to act as a conflict manager between students who are having a fight or other dispute. At the playground each day, there are two fourth-grade mediators who are on duty, marked by their orange vests, that other students can go to if there’s a problem.

“If students have a problem, like if they’re having a fight with a friend, instead of just fighting about it, they can talk to the Peer Mediators,” said Vandyke Counselor Melissa Sutherland. “And the Peer Mediators know the process of how to resolve problems in a calm manner. It’s actually been really great.”

When asked why they wanted to be a part of the Peer Mediator program, three of the mediators, Courtney Brandt, Brock Stram, and Bri Miller, all said that it was because they wanted to help kids with their problems. As the year has gone by, they agreed that they were busier at the beginning of the year, and that they’ve mediated fewer problems as the year has gone by. Sutherland thinks that this is in part because the mediators are teaching the rest of the students by example how to solve their problems on their own.

In addition to the Peer Mediators, which is a year-round, proactive program to help students work through their issues, Vandyke Elementary is having an Anti-Bullying Campaign this spring where the students each receive an anti-bullying T-shirt which acts like a walking billboard with instructions on what they can do to “not bite the bullying hook.” Based on the children’s book “Simon’s Hook,” the campaign uses the fishing analogy to teach the students how to deal with bullying situations. Particularly since they’re a school that overlooks Trout Lake, Principal Sue Hoeft thought the comparison to fishing was quite appropriate for the students.

When asked how the Safe and Supportive Schools Act fits into what they are already doing at Vandyke, Hoeft said that she thinks it’s a good thing in part because it’s bringing the issue of bullying into a wider conversation.

“For our district, I think a lot of the things they’ve been talking about, we’ve been working on for a period of time,” said Hoeft. “There will be some new resources that will come to us; maybe some training and different things like that which we can take advantage of. So I think it’s good in that it increases awareness and gives us more resources.”

According to Sutherland, the Peer Mediator program with the fourth-grade students is just the beginning. Next year, when this year’s mediators are in fifth grade, they’re going to start bringing the program into Greenway High School to carry on the work of students assisting each other with their own problems to help contribute to a generation of emotionally healthy students throughout the district.